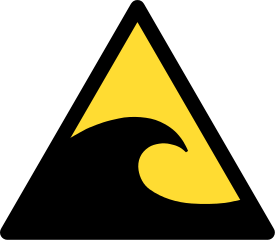 Advances in Tsunami science makes prediction of tsunami possible to some degree. Scientist can now issue warning when a tsunami is imminent. Being able to sound the alarms as early as possible and recognizing this alarms is the key. This is important because most tsunamis are triggered by undersea earthquake and depending on the distance, tsunami waves can reach coastal areas within minutes after the eathquake. Cities in the coastal areas where tsunamis has historically hit or even cities that only has recognizable risk have installed early tsunami warning systems to warn people in coastal areas.

The most common of tsunami warning is the siren. It uses multiple tone signal that rises repeatedly with time to alert residents. The use of sirens for emergency management purposes has been in practice for a long time in many countries so adapting it for tsunamis just make sense.

The crucial part of early tsunami detection system is the Tsunami Warning System (TWS). This system is made up of a network of sensors to detect tsunamis and communication infrastractures that issue alarms to the authorities of the possible affected areas. This warning system has two distinct types: international and regional. International warning systems are located in the Pacific Ocean, Indian Ocean, North Eastern Atlantic, the Mediterranean and Connected Seas and the Caribbean. Regional warning systems are located in countries or cities where tsunamis often hit, like in Japan.

When there is a threat of tsunami in the international level, warnings are issued by the Pacific Tsunami Warning Center to it's international counterparts in the Pacific, Caribbean and neighboring regions for guidance only in support of the UNESCO/IOC Pacific Tsunami Warning and Mitigation System and the Tsunami and Other Coastal Hazards Warning System for the Caribbean and Adjacent Regions. See table below for alert level and definitions.

Tsunami threat message are issued to national authorities when a tsunami has the possibility to affect their coasts. This message describes the threats according to the potential danger and impact to people, structures, and ecosystems on land or in nearshore marine environments. National authorities will determine the appropriate level of alert for each country and may issue additional or more refined information and instructions. Threat messages may be updated based on new information, data and analysis. A final tsunami threat message is issued when the Pacific Tsunami Warning Center determines there is no further threat.

Warnings for domestic are issued by a particular country to their populace. In the USA, they are issued for U.S. and Canadian coastlines and the British Virgin Islands. These messages include alerts and also to cancel alerts if the danger has passed on in case of false alarm. There are four levels of tsunami alerts: warning, advisory, watch, and information statement. See the table below for meaning:

This message is issued when a tsunami with the potential to generate widespread flooding is imminent, expected, or occurring. Warnings alert the public that dangerous coastal flooding accompanied by powerful currents is possible and may continue for several hours after initial arrival. Warnings alert emergency management officials to take action for the entire tsunami hazard zone. Appropriate actions to be taken by local officials may include the evacuation of low-lying coastal areas, and the repositioning of ships to deep waters when there is time to safely do so. Warnings may be updated, adjusted geographically, downgraded, or canceled based on updated information and analysis.

This message is issued when a tsunami with the potential to generate strong currents or waves dangerous to those in or very near the water is imminent, expected, or occurring. The threat may continue for several hours after initial arrival, but significant flooding is not expected for areas under an advisory. Appropriate actions to be taken by local officials may include closing beaches, evacuating harbors and marinas, and the repositioning of ships to deep waters when there is time to safely do so. Advisories may be updated, adjusted geographically, upgraded to a warning, or cancelled based on updated information and analysis.

This message is issued when a tsunami may later impact the watch area. The watch may be upgraded to a warning or advisory or canceled based on updated information and analysis. Emergency management officials and the public should prepare to take action.

This message is issued when an earthquake or tsunami has occurred of interest to the message recipients. In most cases, information statements are issued to indicate there is no threat of a destructive basin-wide tsunami and to prevent unnecessary evacuations. Information statements for distant events requiring evaluation may be upgraded to a warning, advisory, or watch based on updated information and analysis.

A cancellation is issued after an evaluation of water-level data confirms that a destructive tsunami will not impact an area under a warning, advisory, or watch or that a tsunami has diminished to a level where additional damage is not expected.