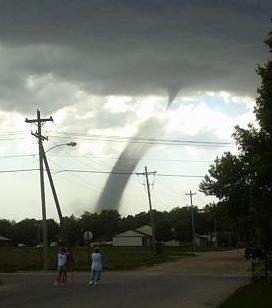 Tornadoes are of various types like waterspouts, snowspout, multi vortex tornadoes but have you ever heard about Landspouts tornadoes. This article will discuss about Landspout tornadoes, their formation, and what damages they cause to the environment.

In 1985, a meteorologist named Howard B. Bluestein coined the name “Landspout.” Landspouts are similar to waterspouts in their mechanism and resemblance. That is the reason so many people get confused in differentiating a Landspout tornado from a waterspout tornado. They both include in the category of tornadoes. However, there are specific characteristics that distinguish Landspout from other tornadoes. As it gets clear from its name that it emerges near the land or surface where the winds are converging. These tornadoes have flat bases and fluffy, cotton-like appearance.

How are Landspout Tornadoes Formed?

In the formation, Landspouts are similar to waterspouts except they occur over the land surface. They also formed when there is no sign of a thunderstorm. Not all Landspouts are visible to people. Moreover, Landspouts are thin, and rope-like in appearance instead of funnel shape like waterspouts does. People often confused Landspouts with other tornadoes. A Landspout classified as a tornado type but certainly, it is different from a tornado. For example, Tornadoes are made up from supercell thunderstorms. The thunderstorms have mesocyclones, which are rotating updrafts. They are strong enough to stretch inside a thunderstorm, a spinning column of air that can reach the Earth surface. Once it makes contact on the ground, a tornado forms. Whereas, a Landspout is not made up of supercell thunderstorms. The convergence of surface boundaries and thunderstorm updraft forms the circulation. The circulation then pulled it in an upward direction to the base of the thunderstorm. In simple words, the tornado always formed from top to down, funnel cloud goes down to the ground but the Landspout always formed as the bottom up. When there is a converging air on the sides of the boundary, Landspouts starts forming.

What Damages it Causes

Although Landspout does not have powerful winds, but it causes damages to possessions and things. This damage may not be severe, but it exists. Another reason due to which it does not cause severe damages is that they formed far from the ground level. According to the EF (Enhanced Fujita) scale reading, Landspouts are usually at EF0 level where the intensity of winds is low and weak. However, winds inside a Landspout tornado can reach 100 miles per hour (MPH). Landspout Tornado is difficult to cast, and Doppler weather radar cannot detect them. That is why the forecast is difficult, and there is no time for warning.

When do Landspout Tornadoes Occur

There is no fixed time of occurrence of tornadoes because they could emerge at any time in the year and may surprise you. Landspouts are hard to see because in most of the cases they are invisible. One can see a Landspout or could guess its presence when the dirt and dust are getting up in the air due to this tornado. Typically, spring and summer months are ideal for Landspouts. So be prepared during these months of the year.

Although Landspout Tornado is not dangerous, safety measures are essential if you encounter one. Do not go near the windows of your house because the wind will break the glass and it can wound you severely. Get shelter inside a basement or firm shelves. For those who do not have a basement in their homes, hide inside a bathroom or room which has thick walls.