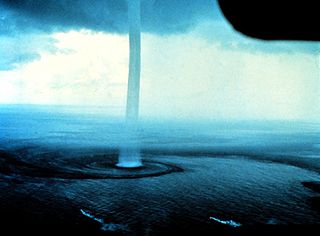 Sometimes the natural phenomenon becomes a horrifying experience. Waterspout tornado is a funnel type cloud of wind that usually occurs over the largest body of water like seas and oceans. Most of the people confused it by its name that it is a tornado comprised of water. In reality, there is no sea or ocean water in a waterspout tornado. These waterspouts usually occur at evening or afternoon thunderstorm.

There are three types of waterspout tornado: tornadic, non-tornadic, and snowspout.

They are more destructive and powerful waterspouts that can destroy things within seconds. They are called as true tornadoes. They rotate on a vertical axis that gives rise to air and causes thunderstorms.

This type of waterspouts is very common and hardly dangerous to lives and environments. They are not fast moving as tornadic which made them static. The estimated lifecycle of fair-weather waterspouts is almost 20 minutes.

Snowspout is known by many other names like ice devil or snow devil. This type of tornadoes also occurs rarely because they are not common. These snowspout builds under the base of snow. Remember that winter waterspout is different from warm weather waterspouts. Most of snowspout are recorded in Canada. There is not more evidence of snowspout.

In the formation of waterspouts, there is a five-step process, which is the following:

Stage 1 - known as a dark spot in which a disk is formed over the surface of the water.

Stage 2 - the formation of a spiral pattern of dark and light colors, which comes out from a dark spot.

Stage 3 - all about the formation of a spray ring.

Stage 4 - the most important stage when the waterspout is visible to all above the surface of the water. At this stage, it takes the shape of a funnel.

Is waterspout tornado threat to boats and ships?

As waterspouts carry intense winds, they are definitely a threat to all boats and ships swimming in the water. The intensity of wind is destructive that it ruins everything that comes in its way. Not just ships and boats but if there is some aircraft passing above these waterspouts will be damaged or thrown away due to powerful waterspouts. It is not allowed to go out for swimming when there is a prediction of waterspouts because your life is precious.

Are they are a threat to sea animals?

Do not take waterspouts easy because they are a serious threat to marine animals as well. When there is a waterspout at the water surface, it destructs all the things and creatures that about one yard to the surface of the water. Whether fishes or frogs will be lifted up in the air. Sometimes the fishes are caught into the funnel wind and go to the top of the waterspout. When waterspout travels towards the land, they carry those fishes with them, which later died due to the absence of water.

Every year national weathers service predict about coming waterspout during the summer season so that people should take necessary measures. The parameters that national weather service consider when the forecast for waterspout alert comprises of air temperature, water temperature, wind speed, moisture near the surface of the water. When the air is cold, and water temperature is warm, there are more likely chances of facing waterspout tornadoes. National forecasting services always make people aware of waterspout tornado before the 12 to 24 hours of their occurrence.